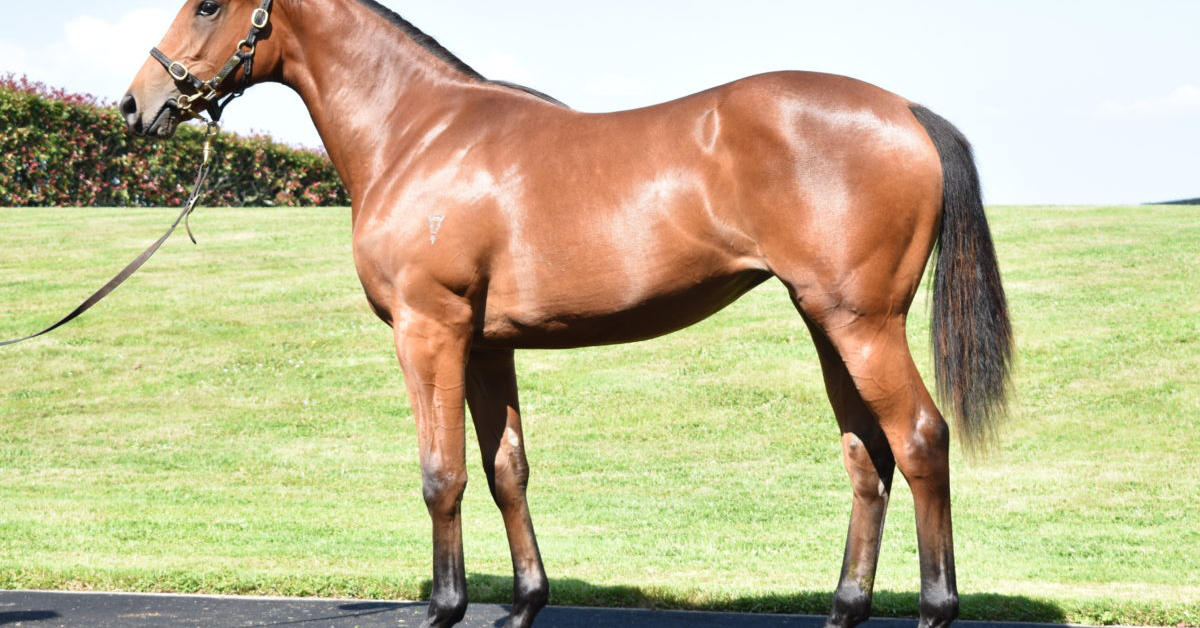 The beautiful Stepanova filly will be presented through the sales ring at Karaka on Monday 27th January at approximately 1-1.30pm.  The team at Valachi Downs along with many industry supporters have done a brilliant job of preparing the filly who looks an absolute picture of health.  We would love to see many CatWalkers ringside to show support and to thank Jo and Kevin Hickman for their generous support.  Who knows – you may be tempted to join together and bid for her!

Spring has officially sprung at Valachi Downs and our smart Brazen Beau filly is now rugged up and relaxing in a yard before prep kicks off next month – along with her sales preparation buddy, a lovely filly by fellow #Darley stallion Astern. Bred and owned by Vern Trillo, she is out of the mare Ka Blues, a half-sister to group performers; Shamrocker, Rock Diva and Bohemian Lily! We are delighted to have two such well-bred fillies to sell alongside our customary draft of smashing colts at the 2020 NZB Karaka yearling sales.

In this month’s update we would like to thank WHITEHALL FARRIERS for their generous support to the cause, in which they have offered to cover all the farriery needs for our charity filly from weaning until she sells through the ring. That’s a whole lot of vigilant trimmings and no doubt some very shiny sale shoes!

Whitehall Farriers is owned and operated by highly experienced farrier Grant Atkinson, and ran with the assistance of his apprentices Matangi Stokes-Sterling and John Atkinson. They are based between Matamata and Cambridge and have been contracted by Valachi Downs for many years. They continuously do a superb job for us and we are very grateful to have their backing on our quest to raise money for The CatWalk Trust.

All the best and we look forward to offering next month’s update.

An update from the team at Valachi Downs Stud as the filly continues with her education:

Our fabulous Brazen Beau charity auction filly has had a stimulating interval since last month’s update. Taking a short practice trip on the Valachi nine horse truck, followed by being “rug broken”. For those unfamiliar, this is when we introduce a cover, firstly in the stable overnight, then on the horse walker and finally out in a grass yard. Additionally her hooves were trimmed and shoulder brands re-clipped so she can be accurately identified as her coat will get tremendously hairy during these winter months. Educating young horses with new experiences as they mature is a huge help in forming a confident and relaxed racehorse down the line and as expected with this smart filly, all challenges were successful!

In this month’s update we are delighted to publish the fantastic support we have received from New Zealand’s premier Thoroughbred sales company New Zealand Bloodstock (NZB) Ltd.

As previously highlighted, the filly will be heading to the 2020 Karaka Premier Yearling Sale. In a benevolent act NZB have offered to waive all sales entries and any commission following her sale, allowing all proceeds to go to CatWalk.

It is extremely heartening when the racing industry comes together as a whole in support of a charitable cause such as The CatWalk Trust, whose spinal cord research may well assist in restoring normality back into the lives of many members of the racing community affected by spinal injury.

Huge thanks to the whole team at NZB, it will be a thrill to watch her sell through the ring at Karaka.

As reported in the Valachi Downs May newsletter:

The filly and her dam returned to the Valachi farm from Sledmere Stud in the Hunter Valley in mid-December and in early March began the foal handling process followed by weaning. She is a confident, curious and intelligent filly with a correct, well-balanced and strong frame. She will come into the barn every 4-6 weeks for assessment and further education leading up to her final sale preparation which will commence in November. We are very excited to watch her grow and develop over the coming months and look forward to giving a monthly update.

We’re not doing this alone, we have the backing of some excellent sponsors who have jumped at the chance to be a part of this special cause.

In this month’s update we would like to give thanks to #MatamataVeterinaryServices (MVS) – Equine. The team at MVS are highly professional and provide a level of service that is unrivalled. MVS have donated a full veterinary care and sales screening package for our charity filly including physical assessments, sales X-rays and video endoscope. Thank you!

In an act of generosity, Valachi Downs principals Kevin and Jo Hickman have gifted a regally bred filly to the CatWalk Spinal Cord Injury Research Trust.

The weanling filly is by Darley stallion Brazen Beau, who will stand at a fee of A$49,500 this coming season. She is out of Stepanova, a Danehill Dancer mare whose dam, Dance On By, is a full-sister to six-time Group One winner and champion sire High Chaparral.

“Hopefully Kevin gets another filly (out of the mare) because he loves to keep his fillies and sell his colts.

“Not only is it a massive gesture giving her away, but how Kevin operates, to give this one away is pretty substantial.”

In a double dose of generosity towards the charity, the Hickmans also purchased the Brazen Beau service at a CatWalk Trust charity event a few of years ago.

The service fee was donated by Godolphin’s Sheikh Mohammed bin Rashid Al Maktoum, who has been a great supporter of the CatWalk Trust for more than a decade.

“Godolphin have had a reasonably long association with the CatWalk Trust. It is a foundation that we have taken seriously and appreciate the work they do,” Godolphin Head of Sales Alastair Pulford said.

“Sheikh Mohammed and Godolphin have always provided something worthwhile to help with their fundraising, because we obviously feel it is very important.

“We were very happy to donate a nomination to Brazen Beau back in 2017. I was there for the auction and witnessed a very spirited bidding duel between Kevin Hickman, whose generosity is unbelievable, and Tony Rider, who was the underbidder.

“Brazen Beau, at the time, had an advertised service fee of A$40,000, so it was a tremendous act of generosity both Kevin and Tony showed towards the CatWalk Trust. Godolphin are very grateful to them as well.”

Hickman selected Stepanova for the mating and at New Zealand Bloodstock’s Yearling Sales earlier this year he decided to gift the resulting filly back to the CatWalk Trust.

“Kevin has always wanted to do something for CatWalk and for Catriona with all the work she has done,” Scully said.

“Kevin came to me at Karaka this year and said he had come up with a cunning plan.

“We went around to see Catriona. I left Kevin to it to tell her (that he was gifting her charity the filly) and when I went back she was crying, she couldn’t believe what he was doing.”

The filly is earmarked to go through Valachi Downs’ draft at Karaka next January and Scully is over the moon with the amount of support this incentive is receiving from a number of people.

“We are hoping to put her through Karaka next year in Book 1,” Scully said.

“New Zealand Bloodstock have confirmed that they will waive the entry and commission fees, which is great, so all proceeds will go directly to the CatWalk Trust.

“Hopefully we might get someone prepared to stump up and pay top dollar for a quality horse and hopefully we can get them to go a bit further because it’s all going to a charity.

“Our vets and farriers are all coming onboard and everything they do for the horse is going to be at no charge, as a donation from them. We have got the full support across the board, so that is a great asset.”

Scully said Hickman has had a longtime interest in the CatWalk Trust and his close friendship with Snow Reardon was a driving factor for his support for the charity.

“One of Kevin’s great mates, Snow Reardon, has been in a wheelchair since he was 18 or 19 when he was injured in a car accident. Kevin has always been a great supporter of Snow his entire life,” Scully said.

“That’s probably given him that close affinity with the CatWalk Trust and Catriona. Snow is actually the one who came up with the name Valachi for the farm.”

Williams has been overwhelmed by the generosity shown by the Hickmans, which she said would help the Charity’s cause tremendously.

“I’ve been fortunate to spend time with a number of former jockeys who have spinal injuries, most recently Sophie Grant and Sophia Malthus.

“Like me, they would give anything to be back on their feet again.

“Research is CatWalk’s focus and that’s exactly where the proceeds from the auction of this filly will go.

“CatWalk’s aim is to get Sophie, Sophia and anyone who dreams of walking back on their feet again.”

Name the Filly – we have a winner!